From antiquity, Euclid’s Theorem asserts that the number of primes is infinite. Since all primes except

are odd, a re-phrasement of Euclid’s theorem is that the set of odd integers

contains an infinite number of primes. A natural generalization, proved by Dirichlet, is that every arithmetic progression of the form

contains an infinite number of primes, provided that

, then the arithmetic progression

contains infinitely many primes, where

denotes the greatest common divisor of

The proof is one of the first application of Fourier analysis on finite abelian groups. Here in this post, we prove Dirichlet’s theorem when

, i.e., both the arithmetic progressions

contain an infinite number of primes. The restriction to

highlights the main structure of Dirichlet’s proof without needing as much background from number theory.

Before jumping directly into the proof, let us first discuss some number-theoretic background and the high-level strategy. First recall Euclid’s argument. For the sake of contradiction, there are exactly

is larger than every

and cannot be a prime of the form

. On the other hand, from the Fundamental Theorem of Arithmetic,

is the product of primes, and one of them must be congruent to

itself is. So some

, a contradiction. One can easily verify that this argument can be adapted to

. However, the argument breaks down when applied to the arithmetic progression

. The reason is that the number

Instead, Euler’s analytic proof of Euclid’s Theorem provides the proper framework to extend the infinitude of primes to arithmetic progressions, where the zeta function

can be written as the product of geometric series of primes:

(Euler-Dirichlet Product Formula) For every

(A note on notation:

always denotes a prime, and

range over all primes.) The identity can be viewed as an analytic version of the Fundamental Theorem of Arithmetic: every positive integer is the product of some prime powers, and the expression

is a geometric series. Since

diverges, The Product Formula also implies that the number of primes is infinite. With additional calculation, Euler proved the stronger form of Euclid’s Theorem:

Now to prove Dirichlet’s Theorem, we will show that the sum

is the indicator function on

for being congruent to

can be decomposed into two sums. Roughly, the first corresponds to the zeroth Fourier coefficient of

, and the second sum corresponds to the non-zero Fourier coefficients and is always bounded. In our writeup, the advantage of restricting to

is that the estimate of the second sum becomes significantly simpler, without further tools from number theory.

(Proof of Dirichlet’s Theorem restricted to

be the multiplicative group of integers modulo

be the indicator function such that

otherwise. Then by Fourier expansion,
for every

ranges over all characters of the dual group of

is a finite abelian group, it is is also isomorphic to its dual, and with

, we can conclude that the only characters of

are: the trivial character

. Thus, we can simplify and rewrite

(For sanity check, one can easily verify via direct computation, without Fourier analysis, that the identities

hold.) For the rest of this proof, we will rely on the the fact that the characters

To prove the theorem, we have to sum over all integers instead of just the multiplicative subgroup of

. To this end, for every character

, we define its Dirichlet character

to be the extension to all of

be the indicator function of being congruent to

. Then it is easy to see that

are the Dirichlet characters of

, respectively. Since we can express the indicator function

It suffices to prove that

. In particular, we will show that

To estimate these sums, we prove the following:

be a Dirichlet character for

is multiplicative, from the Euler-Dirichlet Product Formula,

is real-valued, taking log of both sides, we have 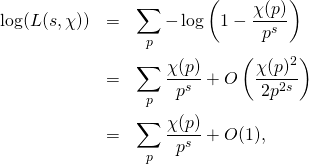 , and the third from the fact that

Now we estimate the two sums using the above proposition. For the trivial Dirichlet character 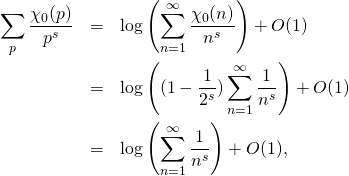 For the non-trivial character

is simply the alternating series

, which converges to a positive number. Thus,

. The Euler-Dirichlet Product Formula works for a multiplicative function taking values in

. The Fourier expansion of

works as before. The Proposition

still holds, but extra care has to be taken since the

-function is now complex-valued. The sum

diverges, but for a non-trivial Dirichlet character

, the fact that the sum

is bounded is significantly more involved. See for instance Apostol or Stein-Shakarchi for further details.

We finish by observing that the proof above has a quantitative form.

(Quantitative version of Dirichlet’s Theorem) For every

In general, for an arbitrary

is the Euler totient function.
Proof proceeds the same as before, where we showed that

. Previously, we simply noted that

. To finish the proof, it suffices to note that