always exists formally, but questions of whether its Fourier series converges to itself can be rather subtle. In general,

may be different from its Fourier series: a Fourier coefficient is the evaluation of an integral, so

can be changed pointwise without affecting the value of any Fourier coefficient. It may be natural to believe that convergence holds when

is continuous. However, an example constructed by du Bois-Reymond showed that continuity is not sufficient. The most general result in this area is Carleson’s theorem, showing that

Here we will prove that the Fourier series of

in the sense of Cesàro (or Abel), and we will highlight through a Tauberian-type theorem that convergence holds when

is “smooth”. In particular, the main theorem we will show is that for a periodic, continuous function, its Fourier series converges pointwise if its Fourier coefficients are decaying at a linear rate.

in the above theorem can be improved to

, but we won’t prove the stronger statement here.

What types of functions are characterized by decaying Fourier coefficients?
A simple calculation with integration by parts shows that if

by the Riemann-Lesbesgue lemma, we have the following:

is differentiable, then its Fourier series converges pointwise to

In general, convergence also holds for other types of smoothness conditions.

We first take a detour (without the Fourier analysis setting) to investigate the different notions of summability for a sequence. The standard and familiar notion of summability captures the intuitive notion that as one adds more numbers from a sequence, the sum gets closer to its limit. More precisely,

if its sequence of partial sums

Under this definition, the partial sums of Grandi’s series

, and thus the series diverges. However, one could argue that this series “hovers” around

since the partial sums oscillate between

. In fact, the average partial sums of the sequence

. This motivates the following alternate definition of summability:

if its sequence of Cesàro means

It is instructive to rewrite the Cesàro mean as 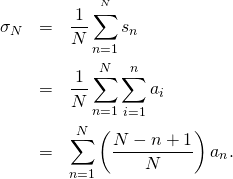 ‘s, where the later terms contribute with a discount linear factor. With this insight, it is intuitive to conclude if a sequence is summable, then it is also Cesàro-summable: a summable sequence must have vanishing “tail”, implying that its Cesàro means form a Cauchy sequence and thus converge.

We can consider another definition of summability where the discount factor is exponential:

Intuitively, Abel summability ought to capture a larger class of sequences. In fact, one can summarize this entire section in the following:

If a sequence is summable to

, then it is Cesàro-summable to

. If a sequence is Cesàro-summable to

, then it is also Abel-summable to 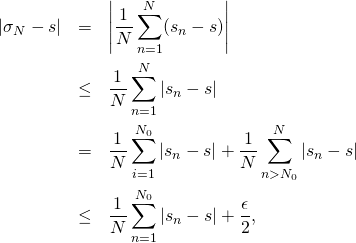 . Then we can write 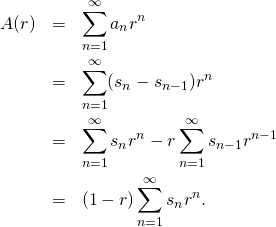 , using a similar calculation as above, we can write

converges (and is thus bounded),

Now it remains to show that

such that for each

Since one can exchange limit with finite sums, 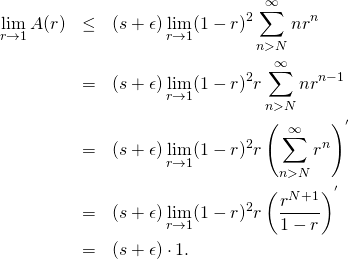 A similar shows that

be the Cesàro mean and partial sum of

is sufficiently large, and by triangle inequality,

, so it suffices to prove that

Recall that in the previous section, we proved that

By assumption, there is some

, and by triangle inequality,

, so it suffices to prove that

. By triangle inequality again, we have

By assumption, there is some

. Again we can break the the above sum into two, and for the later terms, we have

where the last inequality is due to Bernoulli’s inequality, and is bounded above by

is sufficiently large. Together we have

We now come back to the Fourier setting. First recall that

For a periodic function

-th partial Fourier sum to be

We now introduce Dirichlet and Fejér kernels, which when convolved with a function

, we obtain the partial sum and Cesàro mean of

be a periodic function with

.
For any nonnegative integer

. Note that by assumption

. By the Convolution Theorem, the

where the second line follows from the linearity of convolution. Thus, by Tauberian theorem, if

converges to the same value as well.

To prove the main theorem, it now suffices to show that

. We make one last definition:

be a periodic function. We say that

is a family of good kernels if the following three conditions all hold:
(a) for each

The idea is that a family of good kernels essentially approximate the Dirac delta function, which is a single point with infinite mass at

and vanishes everywhere else.

is a family of good kernels.

. (However, the Dirichlet kernels cannot be a family of good kernels, otherwise every Fourier series converges to its function, which is not true.) Intuitively, since

is a weighted average of

with highest weights around

(by the definition of a good family of kernels), we can expect that this value is close to

does not change its value too much around

. Now we formalize and prove this intuition, which will finish the proof of our main theorem.

is a family of good kernels. Let

be a periodic, integrable function that is continuous at

where the first through third lines follow from the definition of convolution, Condition (a) of a good family of kernels, and triangle inequality.

The idea is that when integrating over

is bounded away from

by Condition (b) of a good family of kernels. Since

can be arbitrary, the above integral is

Now for the other values of

is integrable, the function is bounded by some

In the previous section, we showed that the Abel mean can play a similar role to Cesàro. Similarly, one can define the Poisson kernel

and show that it is a good family of kernels as

to prove the main theorem through